In this project, we’re going to practice querying our tables more; in particular, we want to practice leveraging the foreign key columns we added to traverse associations between tables.

And, since we make these particular queries (the ones to find associated rows from other tables) so often, we’re going to add instance methods that wrap up the logic and make it a snap to use.

Here’s the what the domain model looks like in this application, using Entity Relationship Diagram notation: 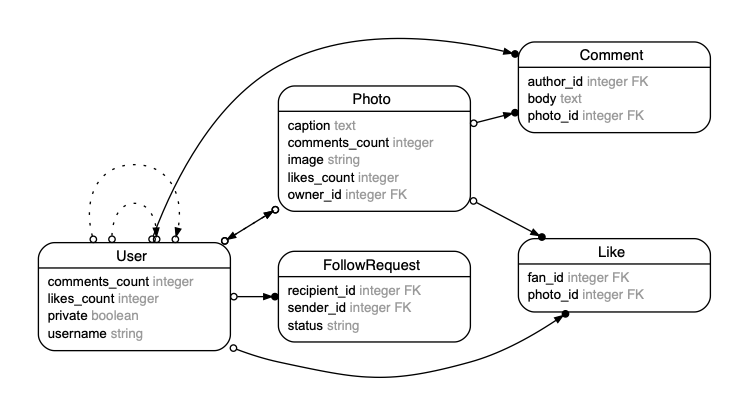 It’s similar to the paper database we printed out on Day 1; if you have it, pull it out, because it will be very helpful to look at it while you are planning out how to write your queries.

I’ve already created these tables by running the following commands:

Play around in rails console

Pop open a rails console and verify that the models got set up correctly:

It would be a huge pain to have to create records in each table before we can practice writing queries, so let’s run the usual program that I include to fill the tables with dummy data. Open a new Terminal to get to a regular command prompt ($) and run:

Then, back in rails console, try counting each table again. You should now have a bunch of records.

A quick-and-dirty visual interface for the database

So far, we’ve focused on learning how to interact with our database tables using Ruby, and we’ve been testing that Ruby quickly via the rails console. Ultimately, we’ll write Ruby programs that do some useful recordkeeping for our users; and we’ll build our users a nice graphical interface to use our programs.

For now, let’s give ourselves a graphical interface to see our database tables; seeing Array containing 323 Photo records when we do Photo.all is just not very helpful. Fortunately, there’s a very nice open-source gem called ActiveAdmin1 that we can include in our project that will automatically give us a quick-and-dirty overview of our database tables.

After including it, there’s not much else to do in order to get ActiveAdmin’s basic functionality; we can just start using it. First, we need to start our web server so that we can begin visiting pages in our application. To do so, at a command prompt, run the command rails server -b 0.0.0.0; or we’ve included a slight shortcut:

Once the server starts (this may take a few seconds), Gitpod should open a pane with our live application running inside it2. Since our IDE (Integrated Development Environment) is already so crowded (with our file explorer, text editor, and terminal), I like to click on the little icon on the right side of the address bar to pop the application open in its own tab.

We should now see the “Yay! You’re on Rails!” default homepage that Rails displays to let us know that everything is working and ready to go. Once we add our own homepage, this will go away. However, since we’ve added the ActiveAdmin gem, there’s another page that already works — /admin. Add that on to the end of your URL and press return — it should look something like:

You should see a page asking for an email and password. The default credentials are

Finally, you’re in. In the navbar along the top, you’ll see links that map to each table. Explore the interface and play around. Phew! This is a much easier way to explore our data than rails console! We can even export CSVs from here, if we want to.

Okay, now that we know we have ActiveAdmin as a resource to look at, it’s time to get back to practicing querying with Ruby.

Aside: Resetting the database

If for some reason later you want to reset the database to square one, you need to first destroy it:

and then re-create all of the tables:

and then re-populate them:

Remember that if you make any changes to a model file, you must exit from the rails console and then launch it again. Or, if you use the reload! technique, then don’t forget to also recreate any variables you were using before the new logic will be available.

Here are some rails console appetizer queries to try. For the user "Trina",

Ultimately, define the following instance methods to encapsulate the logic you discovered in the appetizer queries:

Note: In the Ruby community, a shorthand for saying “an instance method3 called zebra on Photo” is “Photo#zebra”. (Unfortunately this is yet another thing that the octothorpe symbol is (over)used for.)