Before we continue, I want to pause and discuss what, why, and how we’re going to be learning.

Our goal is to build and deploy a fully-functional application, which will require that we learn a little bit about every part of the “stack” — the interface that users interact with all the way through to the server that the application runs on.

We’re going to work from the inside-out. We’ll start by learning how to manage information with a database, because that is the heart of any useful application. Then we’re going to learn how to expose an interface for users to get information in and out of our database — we’ll be starting with a web client because that’s the quickest way to get up and running, but we could add an iPhone or Android client later.

For all of the above, we’re going to use the Ruby language. There are many languages we could have chosen, but Ruby has a lot of advantages for beginners:

Compared to other languages, Ruby is a pleasure to write and to read. Here’s Yukihiro Matsumoto (a.k.a. “Matz”), the creator of Ruby:

— Yukihiro Matsumoto, The Philosophy of Ruby

Matz’s focus when he designed Ruby was on “developer happiness”, which was pretty bold in back 1995 when Ruby was first released. Optimizing for human readability rather than computer readability meant paying a cost in terms of performance, and computers were slow back then; but Matz didn’t care.

Happily, computers are very fast today1, and they can run Ruby just fine; so now we beginners can have the best of both worlds. Besides, once you’ve learned the basic concepts of programming, they’re not hard to translate into the syntax of another language2.

Ruby on Rails and other libraries

People often ask “What’s the best language for task X?” Depending on the task, sometimes a language is particularly well-suited to it technically; but that is very rare. In general, any programming language can do anything that any other language can (unless maybe there is some kind of proprietary platform lock-out).

For example, Python and Ruby are very similar languages in terms of their technical features and performance profile. However, by some historical accident, Python seems to have gathered more of the scientific/data analysis/machine learning community around it, so more open-source libraries in those areas have been developed and shared in Python than in Ruby; and so now Python is the go-to language for those tasks.

On the other hand, for agile development of database-backed applications, Ruby has a huge and thriving community. In particular, there is an open-source library for building applications called Ruby on Rails (“Rails”, for short) that makes small teams or even solo developers incredibly productive. The existence of Rails alone makes the Ruby language a good choice3 for both startups and beginners.

The philosophy of Rails is “convention over configuration” — it makes a lot of decisions on your behalf, and if you go with the flow, then things “just work”. (If you want to fiddle with settings, then of course you can, to your heart’s content; but you don’t have to spend hours or days doing so before anything will even show up, like you do in most other frameworks.) You can focus on building the unique features of your application, not on plumbing that’s common to all applications.

There are a lot of other powerful, easy-to-use Ruby libraries that have philosophies similar to Rails. Ruby seems to have gathered a community of developers around it who are more about creating value for our users, and less about bike shedding over technical details4.

The programming world at large can be pretty competitive and harsh, but I’ve found that the Ruby community is very inclusive and welcoming, which is a relief for beginners. Maybe this can also be traced back to Matz; from his Wikipedia page,

His demeanor has brought about a motto in the Ruby community: “Matz is nice and so we are nice,” commonly abbreviated as MINASWAN.

Heroku and other integrations

Another way in which the ergonomics of Ruby excels is the amount of tooling that exists around it. For example, Heroku was the first “platform as a service”, a layer on top of Amazon Web Services that makes it incredibly easy to deploy applications to an industrial-grade infrastructure. Something that would have itself required a whole separate course to learn how to do, we can now do with just one click; and we can focus instead on building features for our users.

Rails was the first platform that Heroku supported, and Rails developers are still Heroku’s primary users. There are many other services, everything from performance monitoring to error reporting to email delivery to A/B testing to analytics, that offer tight integrations with Ruby and/or Rails and make using them hyper-productive for small teams, solo developers, and therefore also for us beginners.

How are we going to go from zero to Hero(ku)?

To go from complete beginner to deploying a fully functional application is quite a bit of ground to cover. Here’s how we’re going to do it:

As you’ve already seen, we’re going to start by writing Ruby right here in your browser. This is the lowest-friction way to get started, and will allow us to focus on learning Ruby without having to waste mental energy on installing tools.

Later, if you decide to continue with software development for the long-term, you may want to install Ruby on your own computer and switch to a more powerful code editor. We’ll provide guidance on how to do that.

One of our foundational principles while programming, learning, and almost anything else, is to find a way to make the invisible visible — that is, find a way to give yourself concrete feedback on what you’re doing. Don’t guess what’s happening at each step of the program — find a way to see what’s happening, if at all possible. Feedback is crucial.

It turns out there’s a special method in Ruby called Kernel.p (p is short for “print inspect”) that will display its argument in the terminal. Try running the following:

Printing values to the terminal is something we’re going to want to do a lot, and so Ruby makes it easy for us; rather than having to type Kernel.p, we can just type the shorthand of p. Change Kernel.p to p above and give it a try.

To make it even easier to make the invisible visible, here’s another shortcut:

When we discussed Arguments, we said that they always come within parentheses. That’s not quite true. Ruby allows you to, optionally, leave out the parentheses; so the following will also work:

And when you are roaming the internet, you will see this style often, especially with p.

My advice to you is: you can drop the parentheses when you are printing, but other than that, always include them. They help to keep things clear, and they prevent order-of-operations errors.

Use p a lot

I like to use p a lot while I am programming. As I said, one of my fundamental programming principles is make the invisible visible — don’t try to guess what’s going on, find a way to see what’s going on. p is an excellent tool for that, so I use p like crazy, sometimes before almost every line while I am debugging.

It can be tedious to wrap every line in parentheses, and it’s convenient instead to just pop a p at the beginning of a line. So in this one case, I give you permission to omit the parentheses around arguments to a method. Enjoy!

I’m also going to start including challenges in some of the REPLs that you have to pass. This should give you confidence that the code that you’ve written does the correct thing.

You will have to submit your solutions to these challenges, so you’ll have to sign in now using a repl.it account5:

Once you completed the challenge, got the tests to pass, and submitted your solution successfully, you should see something like this (the below is a screenshot, not a real REPL): 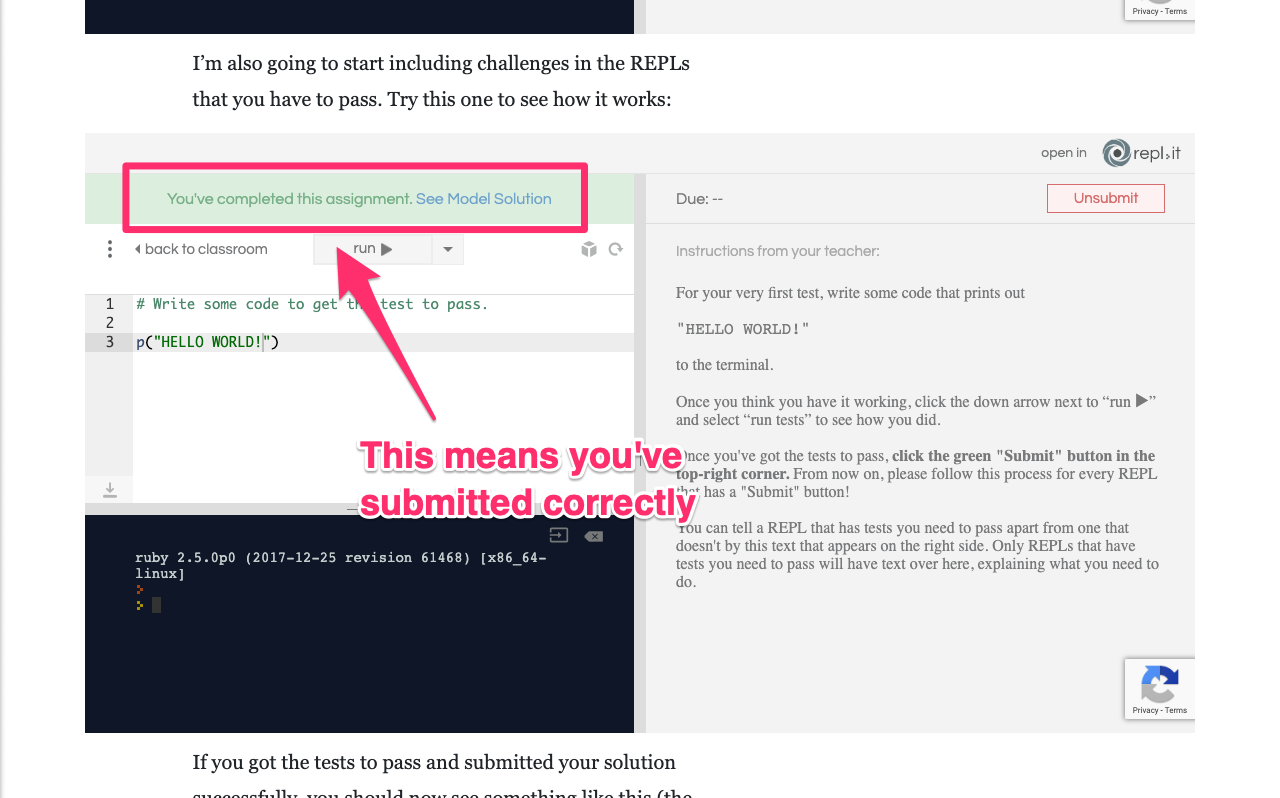 After you’ve submitted a solution, you’ll be able to click “See Model Solution” to see one that I’ve written. Remember that there’s no single “correct” solution — if yours worked, then it’s just as good as mine!

Before we continue learning Ruby, I just want to give you sneak peek of where we’re heading. Most of these words won’t make sense right now, but they will soon!

Okay! With that housekeeping out of the way, let’s move on and learn more about the Fundamental Classes of Ruby, starting with our friend String.